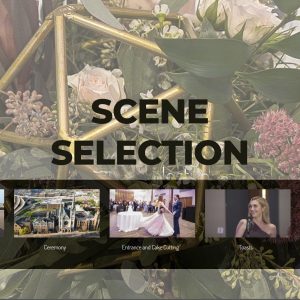 How much footage you receive is one of the biggest factors to consider when choosing a wedding videographer.

It’s one of the “big 3” factors that we advise couples to consider when in the hunt for a wedding filmmaker.

Choosing a Videographer: Lots and Lots of Footage

Our pride and joy is creating your Cinematic Wedding Film, which is a finely crafted highlight film of the best moments of the day. We carefully listen to the words spoken on your wedding day and weave them together in a story arc that will have you laughing one moment and crying the next.

Our longest Cinematic Wedding Film is 20 minutes, and yet there’s still a TON more footage that won’t make it into your Cinematic Film. And we want to make sure you get as much of it as possible.

We also edit Documentary Films of your Ceremony and Reception Key Moments. These videos are of those events essentially in “real time.”

What does that mean?

For your Reception, we focus on the Key Moments, which include a grand entrance, cake cutting, toasts, first dances and any other event that you want captured.

Most Sweet Pea couples end up with final packages that are 40 to 60 minutes long as a result.

But we also know the value of having all that extra footage, too, as time marches on. You’ll definitely linger on those Documentary videos to look back to see all the people who attended your wedding, and to relish in so many moments that didn’t make it into your Cinematic Wedding Film.

Next week, we’ll share the second important factor when choosing a wedding videographer.